“Do you want to hear a story about that small island?” my friend asks as we cross over Pichola Lake in Udaipur. The small island with a courtyard is the keeper of a story about a tightrope walker (natani). It is said that Maharana Jawan Singh of Udaipur promised a natani half of his kingdom if she succeed in walking over the lake on a rope that was suspended above the water. When it was apparent that she was about to succeed one of the Maharana’s ministers cut the rope and the girl fell in the water and drowned. Before drowning she cast a spell on the Maharana’s family that of not having any direct descendants or heirs. Spell or no spell six out of seven of the Maharana’s descendants were adopted sons. 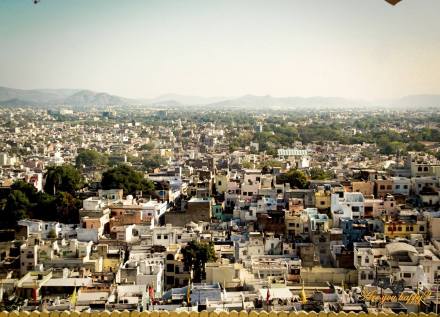 We reached Udaipur (also called Romantic City of Lakes or the Venice of the East) after more than 9 hour drive from Jaipur and landed right in the middle of a Muslim festival. The streets were more crowded than the usual crowd in India – cars, scooters, rickshaws of all sorts, pedestrians, flags, festival arrangements.

While sipping our coffee on the rooftop terrace of our hotel we absorbed the city that was unveiling in front of us. A labyrinth on hills, small streets intersecting even smaller streets, typical Indian houses tall with rooftop terraces put together like domino pieces, painted in light blue and white, Indian ladies appearing from a window or an a terrace here and there carrying about their normal chores and in the middle of it all the Jagdish Temple blissfully located inside the labyrinth like a sweet escape from the madness outside. 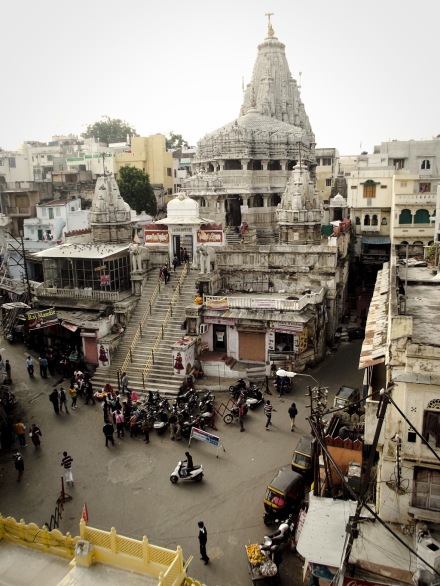 We had less than 2 days in Udiapur so our plan included no plan. We left it all to our feet to carry us around and to the city to uncover its mysteries. 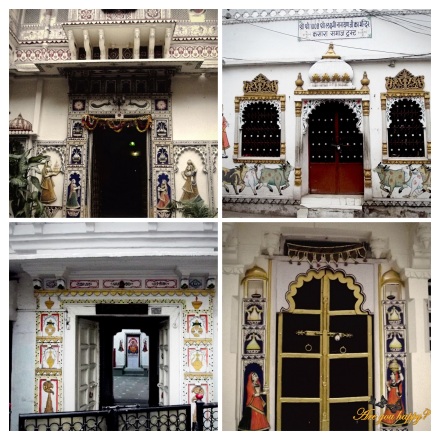 We went wandering the streets amongst houses decorated with wall paintings displaying colourful and elaborated portraits of men, women, elephants and deities…

We mingled amongst the people praying in the Jagdish Temple – an impressive temple built in 1651 well decorated in a way that reminded me of the temples in Khajuraho and with an open air praying area resembling the Balinese Hindu temples..

We got lost in the rooms of the well conserved royal City Palace and admired the panoramic view overlooking the city and the Pichola Lake. Built in 1559, the palace is considered a fusion of Rajasthani and Mughal architectural styles. Legend says that the location of the palace was actually pointed out to the Maharana Udai Singh by a hermit that he found meditating while he was hunting in the Udaipur hills…

We chilled in a small coffee shop on the shore of Pichola Lake admiring the impressive Lake Palace. The formal royal summer palace a Taj hotel since 1971, the Lake Palace is both a royal abode and luxury hotel, loved by people like Vivien Leigh, Queen Elizabeth, the Shah of Iran, the King of Nepal or Jacqueline Kennedy and depicted in several movies amongst which the 1983 Octopussy – Bond series… 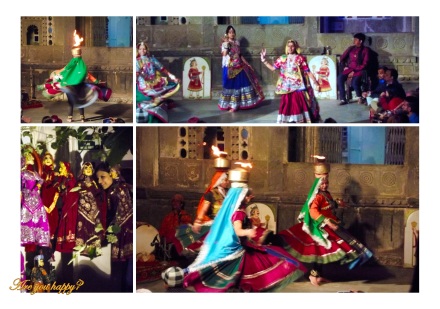 We took a boat ride to the Jag Mandir Island at the Lake Garden Palace. Currently a hotel and restaurant often used for royal weddings and parties the palace used to be a summer resort and pleasure palace for holding parties by the royal family. The palace served also as a refuge to asylum seekers amongst which the “father” of the Taj Mahal – Emperor Shahjahan when he rebelled against his father… 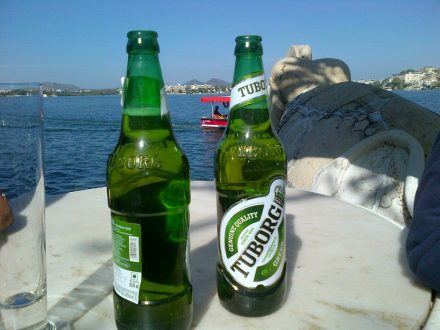 We shared memories and dreams, gossips, jokes, laughter, hidden tears on a rooftop terrace overlooking the Pichola Lake with small fires to warm the night and good wine to warm the hearts… 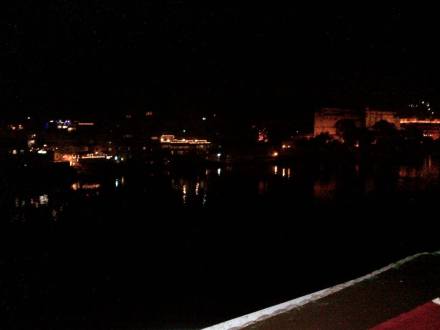 As we listen to the story of the natani our feet carry us through the small streets of Udaipur on a quiet January night. It’s well past midnight and there’s no tuk-tuk to take us to our hotel so we walk. No soul around, no bird, no wind, no move…just the footsteps and voices of three friends talking life. And as we get closer and closer to our hotel and to our imminent goodbyes we know that we are meant to meet again on the streets of Udaipur. Just like the legend says “See Venice and die, but see Udaipur and live to see it again and again”.

Join 353 other followers
Follow Are you happy?® on WordPress.com